In the summer of 2016, four second-year MBAs — Chemitra Clay, Jessica Bialas, James Murray, and Kirsten Kelly — were kicking around ideas for a new initiative at Vanderbilt Business. They envisioned some sort of programming that would encourage students, faculty, and staff to share their personal stories and learn more about one another.

Their idea became Humans of Owen (HoO), an homage to the famous Humans of New York Instagram account. The initiative launched in fall 2016 with a monthly storytelling event and has grown into a major fixture of campus programming. In addition to the monthly events, HoO now coordinates an ambassador program, temporary art installations in Management Hall, and a Humans of Owen Celebration in February, which expanded this year from a week to 10 days. 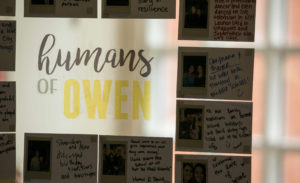 In less than two years, Humans of Owen has gotten buy-in from all over the Owen community (plus a feature in Poets&Quants), and the initiative seems poised for still more growth. Many point to Owen’s well-known personal scale as a reason for HoO’s success — but what does personal scale really look like, and how does it contribute to Humans of Owen? We talked to a diverse slate of student leaders who helped plan the HoO Celebration to find out why Humans of Owen has struck such a chord.

What is Humans of Owen?

The original Humans of Owen programming was a monthly storytelling event, where two people from the Owen community talk for 10-15 minutes each about a personal story from their lives. Volunteer ambassadors also reach out to fellow students throughout the year, asking them to share their stories one-on-one over coffee. Ambassadors record these conversations and edit the clips into a video, which is played at the annual Bubbly Brunch, the culminating event of the Humans of Owen Celebration, 10 days packed full of diverse programming from various Owen clubs.

“I think that’s what makes (Humans of Owen) special. It’s really just a bunch of students coming together and saying ‘We want our community to reflect certain values. Let’s create something to do that,’” said Thayer Rosenberg (MBA’18), Vice President of Inclusion for OSGA, who manages Humans of Owen programming. “It’s still in the startup phase. We’re still trying to figure out what it’s going to look like.” 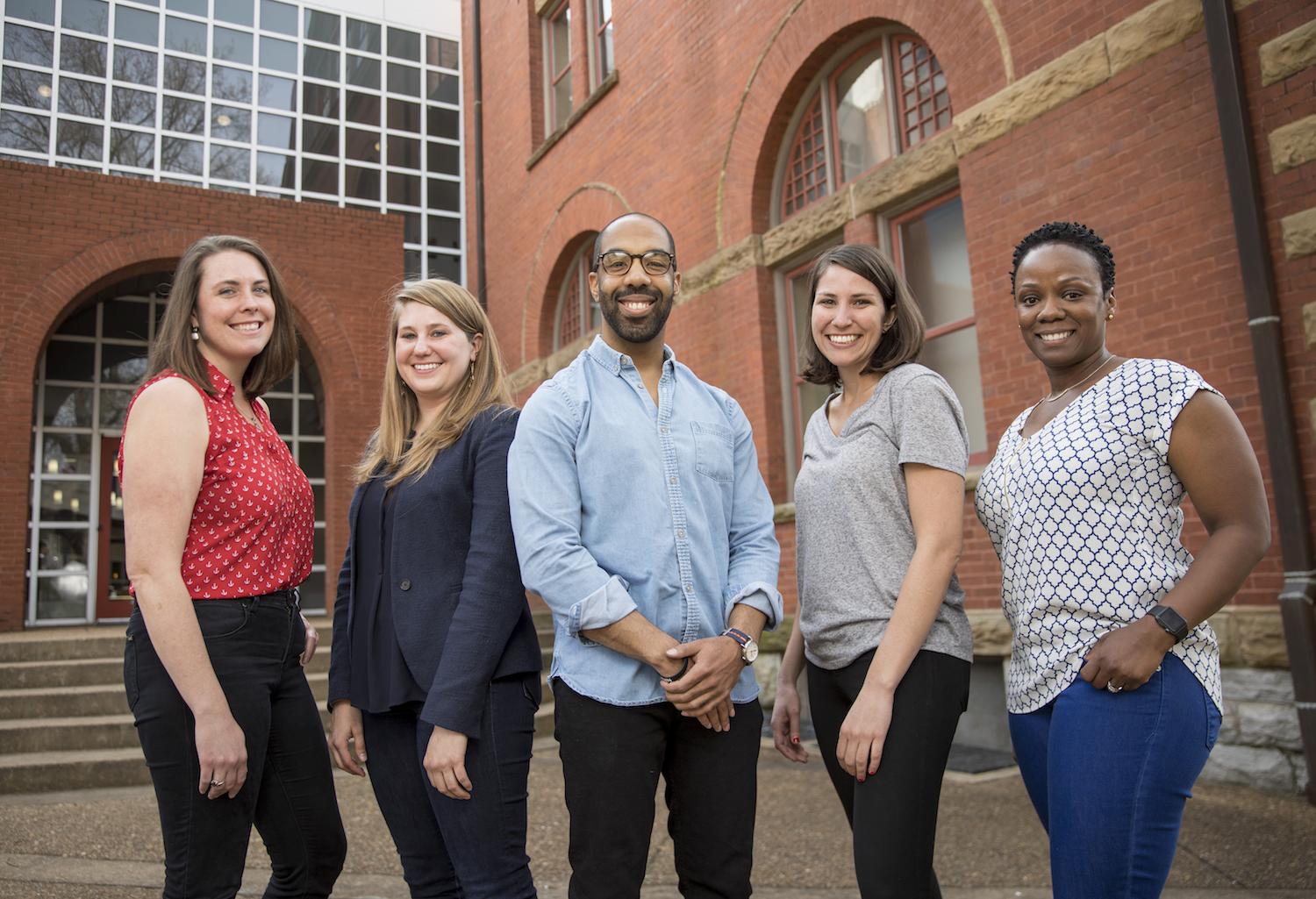 Business school is a busy, stressful time, and it can be difficult to make space for more personal concerns — which is why events like Humans of Owen are so critical to making sure that everyone feels welcomed and heard, according to Rosenberg.

“Life doesn’t care that you’re in business school. It keeps rolling….Relationships break up. Parents get sick. Grandparents pass away. Bad health happens. There’s a host of things that cannot be put on pause because you’re here (at business school),” she said. “I think creating these spaces where we acknowledge that life is more than work and life is more than your profession (is really important).”

Diversity and Inclusion in Action

As Rosenberg’s title — VP of Inclusion — hints at, diversity and inclusion are founding principles of the HoO initiative. “I’m trying to make it so that all 170 students in each year…feel heard and celebrated and acknowledged. I understand that’s a totally ridiculous goal, but that is the goal,” she said.

Part of HoO’s efforts to encourage diversity and inclusion are largely prosaic: proactively reaching out to clubs, making sure that various organizations have money to fund programming, opening up events to the entire student body, and marketing those events to a wide audience. In some ways, the Humans of Owen Celebration functions as a marketing campaign, spreading the word to non-club member through the HoO brand and Owen-wide communications channels, such as Slack and email lists.

“Humans of Owen provides us (another) opportunity to share our culture and stories,” said Weigang Deng (MBA’18), president of the Greater China Business Club (GCBC). The Humans of Owen Celebration overlapped with China Week, which falls during the Lunar New Year; GCBC co-hosted a Lunar New Year Lunch with HoO to celebrate the holiday. Deng notes that affinity clubs such as GCBC often have limited budgets and manpower, so having Humans of Owen broadcast the event to the greater student body definitely helps increase awareness. 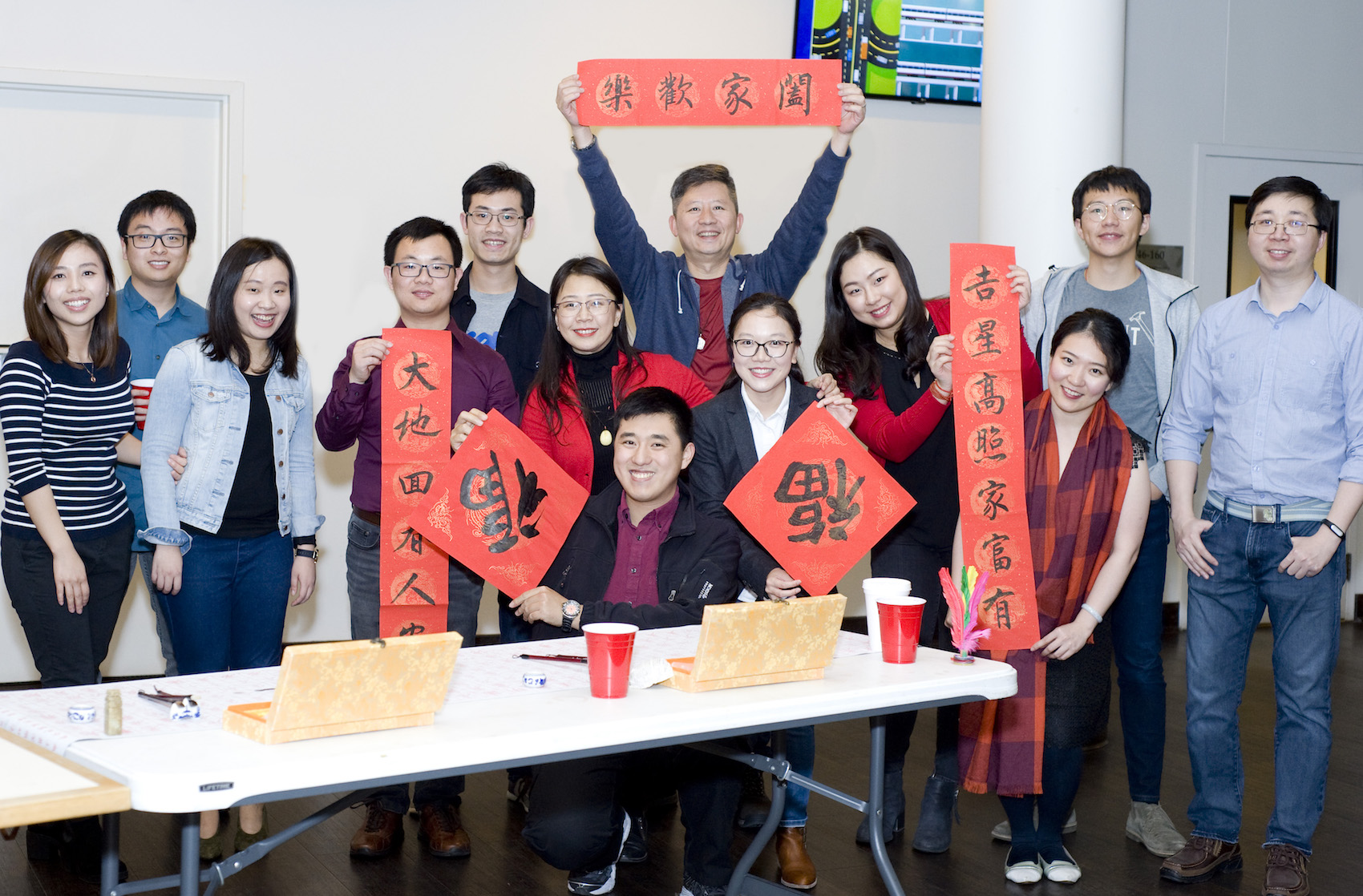 “The important thing is getting the people who have never thought about living abroad or working with international teams also thinking about that,” said Maria José Rodriguez Gaitan (MBA’18), Vice President of Finance for the Global Business Association (GBA). During the HoO Celebration, GBA hosted a student panel on “The Global Workplace.” “I know some of (the attendees) were part of the GBA, but there were some new faces that definitely weren’t part of the club, and I was excited about that.”

Other club presidents have seen this in their own organizations. “(Without HoO promoting these events), these clubs would just reach out to their own club list serves or Slack channels. But we’re sharing all these events in the school-wide communications channels…I think that means some people will go who wouldn’t normally go,” said Noey Neumark (MBA’18), President of the Jewish Business Association (JBA). 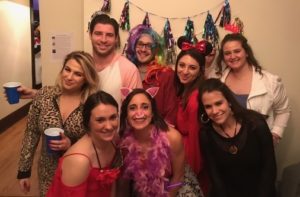 Funny costumes are a Purim tradition

The JBA was already planning a party to celebrate Purim, a joyous holiday that celebrates the saving of ancient Persian Jews from a genocidal plot. When the JBA found out that the HoO Celebration would be happening at the same time as the party, Neumark reached out about including the Purim Party in the official HoO event lineup.

“(Purim) is part of our culture that we’re excited and proud to share, and we feel that’s sort of the whole essence of Humans of Owen week,” she said. “It’s all about learning about each other’s backgrounds and sharing your stories, and I think Purim is part of our upbringing, at least for the Jewish students at Owen.”

While Humans of Owen programming is successful by many measures, the events requires a lot of manpower to coordinate, and it’s hard to get representation from every club and group: There are 41 clubs at Owen, roughly one club for every 11 students. HoO organizers are always trying to reach out to still more groups and get them to participate. “Growth and leadership and diversity and inclusion takes a lot of effort,” acknowledges Gaitan.

Humans of Owen isn’t concerned with faceless representation, though — the whole point of the initiative, and the Celebration, is to encourage personal relationships and vulnerability. Kaitlin Parker (MBA’18) shared her story of a close relative’s death at one of the monthly storytelling events this fall.

“I think it also deepened some friendships that I had before, with people who have gone through similar experiences…Showing my vulnerability and willingness to talk about it also allows other people to do that same thing, which helps people heal,” she said. 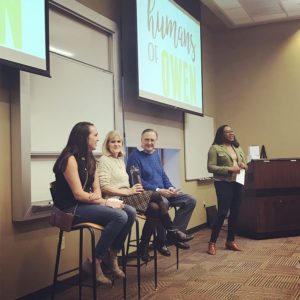 Parker’s roommate also spoke at the storytelling event held during the Humans of Owen Celebration. Even though Parker talks to her roommate every day, she says that sharing their stories at HoO has deepened their friendship.

“I knew the overview of (her) story…but I didn’t know all of the details. I see her in a new light now. She’s incredibly strong, and I think I took that for granted…I’m excited for people to hear it and to see that part of her,” she said.

The willingness to go deeper and shares personal stories extends beyond the monthly storytelling events. This year, the HoO Celebration featured the first-ever Fail Festival, co-hosted by the Vanderbilt Entrepreneur Association and the Owen Speaking Club. Jon Cobb (MBA’18), president of the Owen Speaking Club, pointed out that business school students are focused on presenting their successes to potential employers — but they never talk about when they didn’t succeed. Cobb helped launch the Fail Festival to create an opportunity for students to discuss their (you guessed it) failures, a sharp break from the traditional business school highlight reel.

“It’s healthy to talk about our failures. It helps us stop protecting our egos and start helping each other,” he said. “It’s important to remember that failure is not permanent, and that some of the best things that happen to us come out of those failures.” 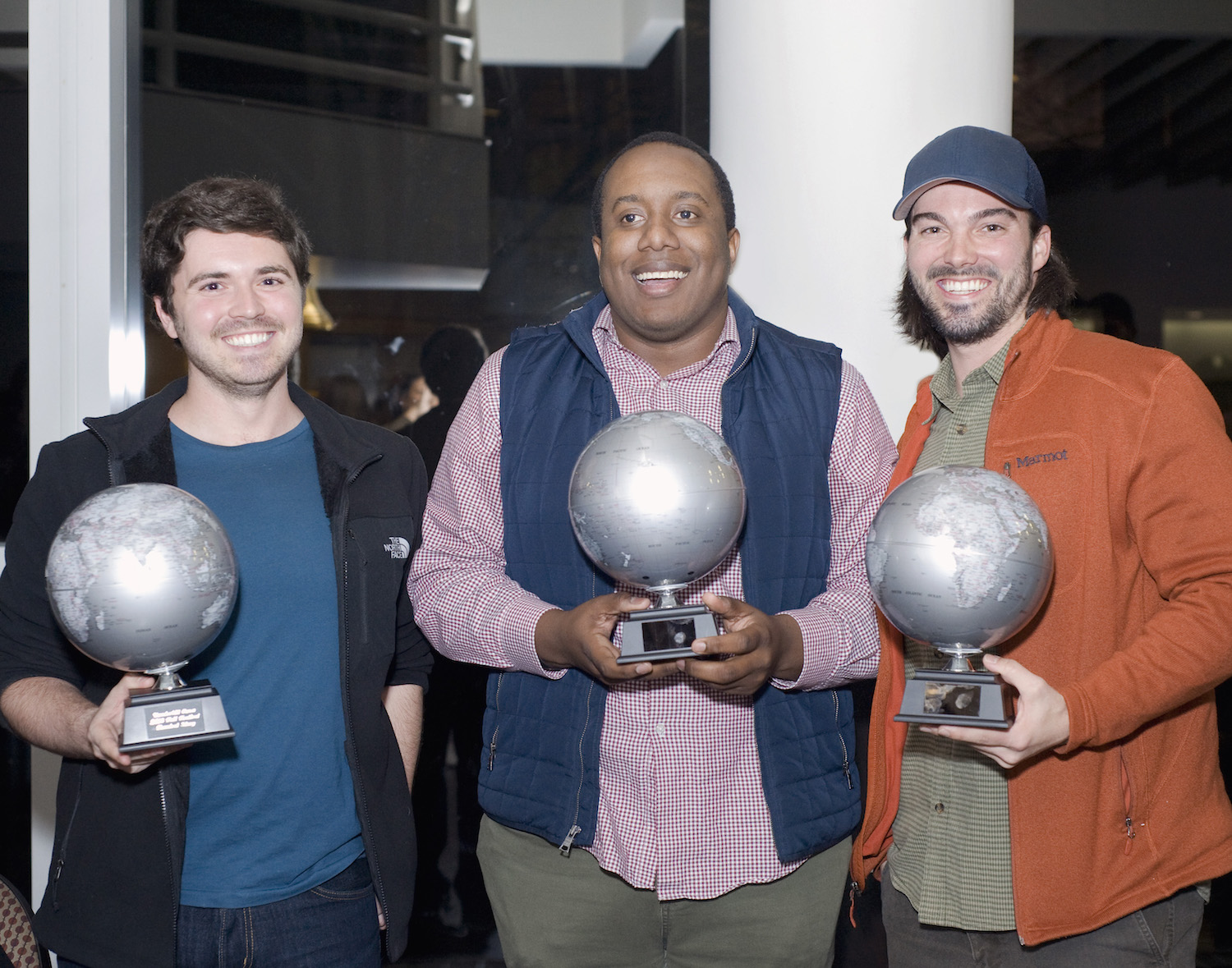 Parker and Cobb say that Humans of Owen has been so successful because of the personal scale and small community at Owen. Other students second that: “(Owen) isn’t not so small that you don’t get the diversity and the differences in backgrounds, but it’s small enough…that you at least get to know everybody’s face, and you’ve probably had a class with most of the people at some point by the time you get out of here,” said Marita Lawler (MBA’18), president of the Latin Business Association (LBA); the LBA hosted a Mardi Gras Carnival on Fat Tuesday, which fell during the HoO Celebration.

“It’s very easy to talk about your current shared experience (at business school), but you already know about that. We’re all in similar classes and have similar professors and homework issues,” she added. Lawler says that Humans of Owen events make space for students to share more personal stories or discuss subjects that don’t always come up in everyday conversation.

“I’ve had people tell me I’m the first Jewish person they’ve met, and ask me questions and want to hear more,” Neumark said. “That’s a new experience for me, but it never feels uncomfortable. People here are genuinely interested in hearing about other people’s different backgrounds.”

People (from other schools) were shocked that we had a lot of classes together and knew each other.
-Kaitlin Parker

After one or two years, students will graduate from Owen and leave behind the Humans of Owen programming — but many believe they’ll still take the values of HoO with them to their new ventures. “Obviously, I want Owen to be an inclusive, warm community, but I also think this is the work world I want to live in,” Rosenberg said.

In fact, students say that they’ve already noticed a difference during recruiting and internships. “Even though (recruiting) was stressful, and I knew we were competing for the same jobs, I never felt like anyone was out to get anyone else. I always felt like we were there to help each other, case prep with each other, work on interview answers with each other,” Neumark said. 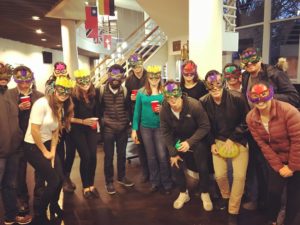 “(At other schools) even though you are classmates, you might not know each other’s name. You only have few chances to speak with each other,” Deng noted. However, Owen students all know each other — a fact that sometimes baffles fellow MBA interns from larger business schools. Parker experienced this confusion when she interned at American Express this summer alongside fellow student Ricky Chan. “People (from other schools) were shocked that we had a lot of classes together and knew each other,” she recalled.

After graduating, Cobb says that he will keep up the close relationships he formed at Owen, and seek to establish similarly deep connections at his full-time job at Deloitte’s federal practice. He says that people are the most important asset in any organization, and that his time at Vanderbilt Business has helped him see that in action.

“Peter Drucker said that ‘culture eats strategy for breakfast’ and culture really comes down to the people,” he said. “When you treat people well and when you genuinely care about them on a personal level, it brings you together and unites you in a way that helps you be successful in a competitive landscape.”

For more information on diversity and inclusion at Vanderbilt Business, as well as resources for specialty candidates, click here.