Seven Trends that Will Impact M&A Activity in 2018

The markets may be entering a correction period, and some regulations may be in limbo, but Anu Aiyengar (MBA’99) is still optimistic about merger and acquisition (M&A) activity in 2018. She should know: The alum became head of the North American M&A group at JP Morgan Chase & Co. in 2015.

“We are bullish on the M&A market,” she told a packed Averbuch auditorium as she wrapped up her hour-long talk. 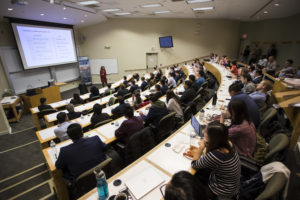 Aiyengar returned to Vanderbilt Business last week as part of the Distinguished Speakers Series (DSS), a student-run initiative that coordinates regular presentations from big-name business leaders. Hosted by Dean Eric Johnson, the talks are open to all students, faculty, and staff at Vanderbilt.

Aiyengar walked attendees through her M&A outlook for 2018, highlighting trends that will continue to have an impact in the coming year, as well as a few that won’t:

1. Growth will continue at home and abroad.

The S&P 500 hit multiple milestones in 2017, and while the stock market is correcting itself after months of unchecked growth, Aiyengar doesn’t see M&A slowing down anytime soon. The U.S. economy is approaching full employment, and interest rates have stayed low, which encourages economic growth and, in turn, M&A activity. And many other countries are experiencing similar growth as well. “Pretty much every economy in the world is growing. It’s not like certain parts are growing and certain parts are going down,” she said.

As the economy improves, companies feel more comfortable trying to merge or buy targets that haven’t put themselves up for sale, increasing the number of deals. “What has been driving (M&A activity) is companies feeling comfortable doing unsolicited deals,” Aiyengar said. She doesn’t see this stopping in 2018.

3. U.S. tax reform will have a positive effect.

The first month of 2018 was the busiest January on record for M&A Activity since 2000. “We had a record January for the overall market. Tax (reform) was a big driver,” she said.

Shareholder activism is continuing to gain prominence after a challenging 2016. Increasingly, these shareholders want more than after-the-fact quarterly reports, demanding strategic plans with objectives that they can hold the companies to moving forward. “Investors in these large funds are demanding that they have more of an impact in the companies that they’re trying to invest in,” Aiyengar said.

The shifting regulatory environment is one factor that can negatively impact M&A activity. Buyers don’t want to announce a deal, only to have it turned down by a sudden change in regulations. “We’re going to closely watch some of the (regulatory) repeals that are currently (being considered) to see if they go through or not,” Aiyengar said.

6. Companies will choose between “click or brick” — and that will impact deals.

The catchy phrase refers to two business models: internet-based digital companies (“click”) and brick-and-mortar-based operations (“brick”). Different sectors and companies may decide that one model is more advantageous than the other. This may cause companies to spin off certain divisions to separate the “click” from the “brick,” or prompt them to acquire a business that’s really good at the opposite model (think Amazon buying Whole Foods). “’Click or brick’ is intended to say ‘What is going to be the business model of the future in every sector?’…That’s an interesting question,” Aiyengar said.

This is more like a trend not to watch for. Aiyengar says that even if interest rates do rise in 2018, they won’t put too much of a damper on M&A activity. “You could make an argument that a deal becomes more expensive (if you raise the rates), but we’re at such low interest rates that, for a while, even if they go up a bit, it’s still going to make a lot of sense to do the deals,” she said.

Want to learn more about Finance at Vanderbilt Business? Check out our MBA curriculum, or visit our MS Finance program page.