Even though it was the night of the midterm elections, there was hardly any mention of politics during the former U.S. Senate Majority Leader Bill Frist’s talk on November 6. “We agreed not to have, and I don’t think anybody wants to hear, any conversation about politics, even though this is election day,” joked Larry Van Horn, Executive Director of Health Affairs and Associate Professor of Management (Economics) at the Owen Graduate School of Management, following an introduction by Ralph Owen Dean M. Eric Johnson.

While Frist is most known for his 12 years in the Senate, including four years as Senate Majority leader, he also has extensive experience in healthcare both before and after his time in politics. In fact, Frist and Van Horn co-founded the Nashville Health Care Council Fellows program, which brings together top healthcare executives from around the country to explore new solutions that meet the challenges facing the U.S. healthcare system.

This deep industry experience is why the Vanderbilt Business Healthcare Association (VBHA) invited Frist to campus as their first speaker in a three-part series, “Talking Health,” which was attended by students and alumni from the MBA and Master of Management in Health Care programs. A recap of Frist and Van Horn’s talk follows below.

A Personal History in Healthcare 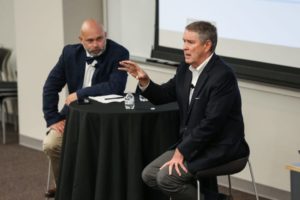 Frist has family heritage in the medical field as well as the business world. His father and brother, Dr. Thomas Frist, Sr. and Dr. Thomas Frist, Jr. founded the Hospital Corporation of America (better known as HCA) with Jack Massey. Frist himself went on to become a surgeon, graduating from Harvard Medical School and eventually specializing in heart and lung transplants.

“At that point, there were no companies in America in healthcare in the top Fortune 100. There were none. Now there are 18,” Frist recalled of the time HCA was founded. “All these sorts of business principles that are fundamental today had not been applied to healthcare at all.”

This union of healthcare and business has influenced his post-Senate career, and now Frist focuses on investing in healthcare companies. While he knew he was doing positive work as both a surgeon and a Senator, Frist wanted to do something that would have an exponentially greater impact on people’s health, and that’s what led him to investing. “The only way you can go to scale with disruption is through the private sector,” he said.

The Future of Nashville Healthcare Investment

After the introduction, Van Horn turned the conversation to the topic of the night: healthcare investments in Nashville. He and Frist discussed the different types of investing — angel investing, series A, series B, private equity, venture capital, etc. — as well as the two main investing groups he is part of, Cressey & Company and Frist Cressey Ventures. Frist explained that these types of funding can also vary from investor to investor and firm to firm. 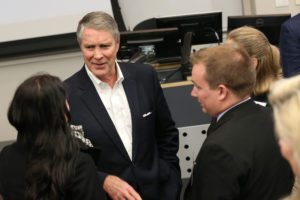 Frist speaks with attendees after the event

“(At Cressey & Co) we’re thematically driven. We will find five buckets where we think healthcare has a need, and we will invest around that,” he said. “In the venture world, we’re more opportunistic, but it has to meet certain criteria…that’s a personal investment style.”

When Van Horn asked about the future of healthcare investment in Nashville, Frist predicted that more and more funds will come from outside the area in the coming years, even though many investments now come from local investors and firms. “I predict that we’ll see, in the next five years, not only will we grow faster in venture capital, but there will be more of that growth from the outside coming in,” he said.

Frist cited the 2016 investment his company Aspire Health got from GV (formerly Google Ventures) as evidence of the sort of funding that might be coming to Nashville more often in the future. “(GV) wanted to get here because Nashville has the service delivery, so if you want to have an iterative process…and get quick feedback to change course, (that can happen). Whereas if you’re out on the West Coast, it’s slow and small and in one community, and that’s not where great innovation happens.”

“Nashville is a hard place for people to break into, which is good for us because there’s a mystique about it. Everybody wants to come to Nashville,” he added.