From parties at Plaza Mariachi to trekking across Colombia, the Latin Business Association (LBA) offers an immersive cultural experience

This week, Owen’s iconic Management Hall will transform into a stunning photographic showcase of Latin America’s natural beauty. By posting scenic photographs throughout the building, the Latin Business Association (LBA) hopes to grow other students’ appreciation of the lush landscapes they call home. The photographic exhibit is part of the club’s annual Latin Week, which falls on February 9 through 14 this year.

From parties to political lunch and learns, LBA’s signature programming has immersed countless students in Latino culture over the years. Whether they hail from Latin countries, have Latin-American heritage, or are simply interested in learning more about the culture, all members are quickly welcomed into the tight-knit community. 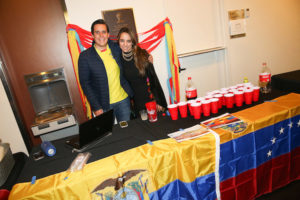 In light of recent events surrounding the proposal of a Mexico-United States border wall, Latin Week will have an added political twist this year. “Latin Week is going to concentrate on how this new message and rhetoric (is) affecting the lives of Latinos and Hispanics here in the States,” said Jose Espinosa (MBA ’19), president of LBA. As part of the Latin Week programming, LBA is hosting lunch-and-learns with two professors in Vanderbilt’s Political Science department who have differing views on immigration.

While LBA seeks to raise awareness around more serious issues surrounding the Latino community, it also hopes to share the fun side of the culture. Also during Latin Week, LBA will host Owen’s beloved Closing Bell on Thursday night, bringing a distinct Latin twist to the usual fellowship, food, and drinks. Students will dance the night away to live music performed by local Latino musicians, and of course whet their appetites with delicious Latin cuisine.

Aside from Latin Week, LBA hosts monthly Spanish lessons where students can relax with a beer and show off their Español. “It’s incredible how much Spanish a lot of my classmates already know,” Espinosa said.

LBA has also hosted two parties this year, with an impressive turnout of around 70 students each. These parties provide the chance to unwind from a long week of school and explore Latino cultural venues in Nashville like Plaza Mariachi. 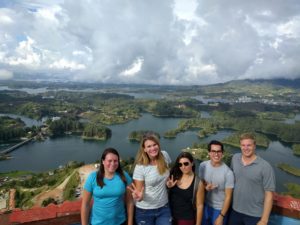 While LBA often brings Latin America to Owen, it has also brought Owen students to Latin America. During fall break 2017, 12 students travelled to Colombia to gain exposure to international innovation and entrepreneurship on a trip hosted by LBA and the Global Business Association (GBA). The students visited a variety of companies, including a rose farm and Portafolio Verde, a consulting firm that helps companies like Starbucks reach sustainable development goals.

“There were assumptions from students (before the trip) that Colombia is a third world country,” said Mario Avila (MBA ‘12), Director of the Turner Family for Social Ventures, who accompanied students on the trip. “(But) the overwhelming response from the students is that it’s a bustling country with a lot of opportunity.” 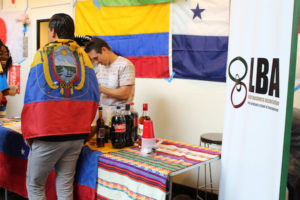 Although small, the Latino community at Owen is extremely strong. “We are best friends,” Espinosa said. “We get together all the time.” There are currently nine international students from Latin America, including Espinosa, who is from Ecuador (though LBA itself has 50 registered members from all backgrounds). The international students find a home away from home by connecting with the Latino community in Nashville. Some of their favorite outings include monthly visits to a Venezuelan stand in the farmer’s market and La Cucharita Colombian Restaurant.

While Espinosa looks forward to welcoming a new generation of students into the Owen and LBA communities, he also hopes to grow the organization organically by generating more interest among existing students. “Sometimes they believe this club is for Latinos by Latinos, (but) a lot of people know about Latin America and are interested in the culture and the people, so I would love to have more Americans join,” he said.