Xiaoyan Jiang, MBA’01, is a strong believer in the transformative power of international travel. Travel can be an ice-breaker in a conversation, a point of contact that turns a
stranger into a friend, and the key to a vast professional network. Jiang has experienced it firsthand. While working for some of the biggest names in global business—from Deloitte to GE to Deutsche Bank—Jiang logged addresses in Nashville, Cleveland, Tokyo, Hong Kong and New York. In her role as managing director and head of Asia multinational banking for BNP Paribas, she crossed the ocean nearly every other month. Jiang credits travel as the catalyst that set her on a path to Owen, and motivated her to establish the Sheng Family Study Abroad Fund earlier this year.

In the late 1990s, Jiang’s Beijing-based employer sent her to Brussels to train as an EU conference interpreter. The experience inspired her desire to see other continents,
too, so she set her sights on business school in the United States. At the time, she confesses, “I didn’t know much about the U.S. other than what I’d learned from watching movies.” She decided to apply to Vanderbilt by “following an intuition that the south of China— where I’m from—and the Southern United States might be culturally similar.” A scholarship made it possible for her to attend Owen, where her hunch was mostly confirmed.

“As she read the emails of gratitude from students, she marveled, “I could see it in action—their perceptions shifted, their worldview expanded.” ” —Xiaoyan Jiang

People were friendly like they were back home, but a difference Jiang noticed right away was how much more relaxed people were. She remembers, “The ‘work hard, play hard’ mentality was very evident in Owen’s standing Thursday night happy hour and weekend time off.” She adds with a laugh, “This was a huge culture shock for me, and it wasn’t until well into my second year that I started to relax, just a little bit.” Jiang also was surprised by the size of the Chinese community in Nashville. “Of course, it’s not as large as New York’s community,” she says, “but i 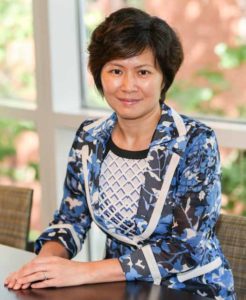 t is more than enough to make you feel at home.” To this day she maintains strong ties, staying in contact with the person who picked her up at the airport in Nashville 20 years ago.

Outside of the Chinese community, however, Nashville didn’t immediately offer the easy cultural exchange Jiang imagined. While her Owen professors were very accessible,
collaborative and warm, she initially found the interaction between the American students and the international students to be more restrained than what she’d envisioned. “It wasn’t discrimination,” Jiang is quick to explain. “It was just that 20 years ago, very few American students at Owen had traveled to Asia or had fluency in Asian culture. We
had no idea how to interact.” Jiang worked hard to navigate the social terrain, and went on to forge some of her closest lifelong friendships at Owen. When she began to consider how she could give back to the school, it was her early experience that inspired Jiang and her husband to establish the Sheng Family Study Abroad Fund. The fund stipulates a preference for supporting American students’ international travel. By giving them the opportunity to learn more about and experience other cultures, Jiang believes it will “indirectly help international students and make the environment easier for them than it was for me.” Jiang hopes access to travel will help facilitate cross-cultural dialogue and friendships. “If I spend a week or two immersed in someone else’s culture,” Jiang says, “we instantly have something to talk about.” The first group of students to benefit from
Jiang’s generosity were those in Ray Friedman’s China Project Course. Through the course, students traveled to China to work closely with companies on diverse research topics that included payment systems, MBA hiring practices and the car market. This trip “allowed them to see, in depth, how business works in China,” says Friedman, who is Brownlee O. Currey Professor of Management. “Experiencing local transportation, talking to people, seeing how they interact, and getting a feel for several major cities provided a type of learning that is only possible with a personal visit. Many students came back saying it was an eye-opening experience.” This was exactly the impact Jiang dreamed her support would have. As she read the emails of gratitude from students, she marveled, “I could see it in action—their perceptions shifted, their worldview expanded.” Jiang also hopes the fund will contribute to strengthening Owen’s global network. When students travel abroad they can establish professional connections, meet local alumni, and potentially consider international careers. She is thrilled to make introductions for Owen alumni and to give back in any way to the school that gave her so much, she says. In addition to helping provide a foundation for her career, Owen—and travel—acted as a matchmaker for Jiang and her husband. “A close friend traveled from Morocco to Nashville to surprise me at my Owen commencement,” Jiang recounts. The surprise turned into a life together and three children who, following the family tradition, each hold three different passports. “I feel very strongly attached to Owen and have so many beautiful memories. I would really pick up my bag and fly to Nashville anytime.”

Lily Kane is associate director of communications with Vanderbilt’s Office of Development and Alumni Relations Communications.