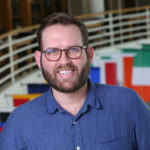 The Vanderbilt Business School has an established partnership with Reaching Out MBA (ROMBA), a nonprofit organization that has been educating, inspiring, and connecting the next generation of LGBTQ business leaders for more than two decades. As a ROMBA partnership school, Vanderbilt Business awards Reaching Out MBA Fellowships to MBA students that self-identify as LBGTQ. The school has given scholarships to students in the daytime program for several years, but this is the first time that the Executive MBA program will award the Fellowship.

Geffre grew up in Phoenix, Arizona, and earned his Bachelors of Science from Arizona State University. After that he began working for Wells Fargo in the financial crimes division, primarily looking at home mortgages and transactional fraud review. Geffre spent most of his career with Wells Fargo until about a year ago, when he moved to Nashville in order to be with his partner. Geffre then began working as a compliance analyst in UBS’ financial intelligence unit.

As a newcomer to Nashville, Geffre was drawn to the network offered by the Vanderbilt Executive MBA program, as well as the potential to accelerate his career trajectory. “My entire career has been based in Arizona. Coming to a new city, not having a graduate degree — I knew that was something I wanted to do. And I knew that now is the best time to do it, because Vanderbilt has a really extensive network,” he said. “After the MBA, I’m hoping that I’ll be able to start transitioning myself as more of a senior leader and start moving into more into a higher-level decision maker role… an advanced degree is necessary to do that.”

Geffre is passionate about raising awareness for the LGBTQ community, especially in the business world; he’s participated in the Pride Networks at both Wells Fargo and UBS. “Stereotypically (the business world) is pretty conservative. But I think businesses as a whole now are recognizing the benefits of diversity and they’re really trying to exemplify that they are a welcome place for diversity,” he said.

“It’s important to have people at senior levels, being out, being gay, being open, that way, we know that there is somebody there and that is an option for us,” he continued. “There are things that affect the LGBTQ community that don’t affect the hetero community, so it’s always nice to have somebody that you’re able to confide in, who can empathize with whatever issue you may be having.”

While he’s new to ROMBA and Owen, Geffre says he hopes to raise awareness of the organization and its scholarship opportunities among incoming LGBTQ students during his time here. “You have to self-identify; the school can’t make assumptions. I think going forward that’s something that Owen and the current ROMBA fellows can probably partner on,” he said. “(We want to make sure that) people understand why it is important to self-identify, be counted, be there, be present. That way they know that what opportunities are available to them coming in.”