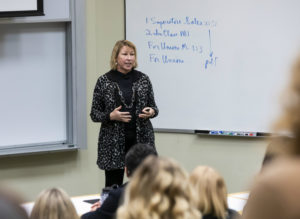 Sarah Trahern (EMBA’04) is a major figure in Nashville and the music industry at large: the Vanderbilt Business alumnae used her prior experience at C-SPAN, The National Network (TNN), and Great American Country to become the CEO of the Country Music Association (CMA).

Trahern came to speak at Vanderbilt last month as part of the Distinguished Speaker Series (DSS). A student-run initiative, DSS regularly invites prominent leaders in the business world to share lessons they learned during their careers. Past speakers include Daniel Fete, CFO of AT&T Communications, LLC, and Sam Samad, CFO of Illumina. Trahern’s talk was also co-hosted by the Women’s Business Association (WBA). All students, faculty, and staff at Vanderbilt are welcome to attend the talks.

Trahern shared the story of how she started her career in television and politics before pivoting to Nashville and country music. Here are Trahern’s five pieces of advice for aspiring business leaders:

1. Know what skills you bring to the table.

When Trahern worked for C-SPAN, she was a senior producer who managed a team of people who were older than her. It was challenging work, especially when two people didn’t get along with each other. She looked to her past as a residential advisor in college and applied what she learned to resolve conflicts at C-SPAN. Through that experience, she learned that each position she held gave her skills to succeed at her next job. “You’re always going to continue to evolve. Whatever job you’re doing now going into your second year (of the MBA program) may not be a job you’re in five years from now. It’s a very fluid marketplace today. But as long as you’re pivoting and learning along the way… (it’s) just the next chapter,” Trahern said.

2. It’s okay to leave your current place in order to grow.

Trahern loved her job at C-SPAN but felt like she needed to move on to the next right thing in order to grow as a professional. “At a certain point, you often have to leave to grow, and that’s okay,” she explained. “The organization needs to have some sort of turnover time to be vital.” And leaving might not be the end of your journey at that company: Trahern recalled how one of the employees in the CMA sales chain left to do partnership sales for music artists, gained some additional skills, and then came back to the CMA for a higher-level position.

3. Take a chance and do something differently.

While looking for opportunities outside of C-SPAN, Trahern realized that she wanted to move to Nashville. However, she kept getting rejected from jobs because she didn’t have any music industry experience on her résumé. When she heard that Vice President of TNN had changed, she knew she needed to try a new approach. “Rather than just (sending) my HR resume, which I still encourage people at our place to do, I wrote (him) directly, and I wrote him a killer cover letter,” Trahern said. The letter led to an interview and, consequently, a job, allowing Trahern to move to Nashville. “I do believe that it doesn’t hurt you to go through the system, (but) push the edges sometimes if you need to,” Trahern said.

All throughout her career, Trahern expanded her networks, which contributed to her success. For instance, while interviewing for the position of CEO at the CMA, Trahern knew eight of the 10 interviewers from her prior connections. Ultimately, she landed the job. “Relationships matter. And it’s an incredibly small world. So the person who’s your intern today may be at work here tomorrow,” Trahern said.

Trahern says that she loves her current job and looks forward to going back to work after vacation. She advised attendees to pursue work they are similarly excited about. “Find something that you’re passionate about, because I believe your success follows,” Trahern said. “Even in the best jobs, there are days that suck. If you love what you do, it’s easier to get out of bed on those bad days. And it doesn’t feel like work on most of the good days.”

How to Measure your Success as a Leader
Read More >