5 Leadership Lessons from the CFO of AT&T Communications, LLC

As the Chief Financial Officer of AT&T Communications, LLC, Daniel Fete has a rich history of financial leadership at the company, having previously served as CFO of AT&T Technology and Operations and CFO of AT&T Business Solutions. His financial leadership during AT&T’s recent acquisition of Time Warner has been instrumental in facilitating AT&T’s evolution from a telecommunications company into a modern media giant. 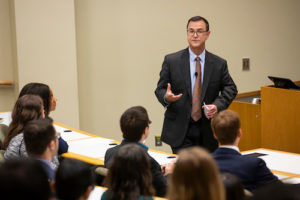 Fete came to speak at Vanderbilt Business a few weeks ago as part of the Distinguished Speakers Series (DSS). DSS is a student-run initiative that regularly brings in high-profile speakers to share their business insights at Vanderbilt. Past speakers include Lynn Good, CEO of Duke Energy; Anu Aiyengar (MBA’99), Head of M&A North America at J.P Morgan; and Reese Witherspoon, Oscar award-winning actress and founder of Draper James. Hosted by Dean Eric Johnson, the talks are open to all students, faculty, and staff at Vanderbilt.

Fete shared the leadership lessons he has learned over the course of his career, from his beginnings as an accountant for Arthur & Young (now EY) to his current position as a respected financial leader in the telecommunications industry. Here are Fete’s top five tips for aspiring business leaders:

While Fete attributes much of his success to luck, he also points to his willingness to seize the opportunities he was given. “In reflection of my career, I’m glad I just said yes to some of these roles, even when they were moves for me and my family,” Fete said. “By making all these moves and saying yes to these roles, I learned and gained the skill set that helps me be successful today.”

In fact, Fete almost declined a role early on in his career that later turned out to be transformative. Ultimately, he did decide to accept the offer, launching himself on a path to success. “Had I not taken that role, I probably wouldn’t end up in CFO jobs today,” he said. “In that role, I started dealing with more people… I was out interviewing engineers and interviewing product development people, interviewing marketing people… In reflection, I’m just glad I got my head on right in about a week’s period of time and said yes to that role because everyone I have said yes to has given me something.”

2. Accept help from others.

Over the course of his career at AT&T, Fete has taken advantage of many unique opportunities, including an international role in Chile. Unfamiliar with the Chilean culture and unable to speak Spanish, he learned to depend on his colleagues for help.

“You can’t do it alone,” Fete said. “You have to have people help you all throughout your career. Don’t ever be hesitant to ask for help. People teach. There are people who worked in that area for years. Learn from them, develop those relationships.”

Fete champions diversity in every sense of the word: academic background, race, nationality, gender, religion, and more. “Diversity of anything is important,” he said. “Get as much experience as you can in as many different places. It will make you better, it will make your team better. When I look for a leader, I’m looking for a leader who builds a team that’s a diverse team.”

Data, Fete insists, is the future of decision making. “Data will be the asset of the next century,” he said. “It won’t do us any good if I can’t get insights off of it. When I hire people, I want people who are going to be able to do that five years from now. Otherwise, we’re not going to be the best finance organization in our industry.”

5. Define your own success.

Although Fete has achieved C-suite success, he encourages everyone to define what success means to them and pursue it. “Everybody creates their own path,” he said. “No matter what level you end up at, you’re still successful. I have some of the most successful people in my mind who are third levels in our organization. They did it the right way. They like their job. They like the people that they work with. You’ll find your way. There are different paths.”