5 Lessons in Leadership from a Fortune 500 CEO

Lynn Good, CEO of Duke Energy, came to speak at Vanderbilt Business as part of the Distinguished Speakers Series

Lynn Good is the Chief Executive Officer of Duke Energy, a Fortune 500 electric power holding company, and she came to speak at the Owen Graduate School of Management a few weeks ago as part of the Distinguished Speakers Series (DSS).

DSS is a student-run initiative that coordinates regular presentations from big-name business leaders such as Anu Aiyengar (MBA’99), head of the North American M&A group at JP Morgan Chase & Co. and Dayne Walling, the former mayor of Flint, Michigan. Hosted by Dean Eric Johnson, the talks are open to all students, faculty, and staff at Vanderbilt.

Good spoke on the state of the energy industry and also offered advice based on her long career. Here are her top five lessons for aspiring business leaders:

The path to the top is rarely linear.

Good began her career in the utility industry at Cinergy, which merged with Duke Energy in 2005; she was named CEO of Duke in 2013. However, prior to that she was a partner at two international accounting firms, including a long career with Arthur Andersen. “It’s been more zig zags than you might expect…but I think you’ll find that to be the case with many executive leaders. It’s not a linear path,” she said.

A major setback does not mean the end of your career.

While Good was employed at Arthur Andersen, the firm became embroiled in the Enron accounting scandal and closed up shop in 2002, leaving Good to start over – even though she never worked on the Enron account. Despite this setback, she was able to build a successful career in a new industry and went on become one of the few Fortune 500 female CEOs.

“(A situation like that) doesn’t mean career over,” she said. “What it taught me very quickly was that I was the asset, so I had to figure out what I was going to do. It’s less about who you work for, and more about what skills you’ve acquired.” 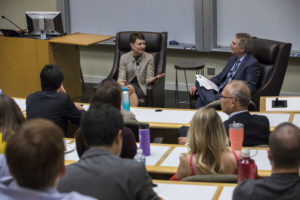 Communication is of paramount importance.

Good describes herself as a “math person” and has spent her whole career in technical industries such as accounting and energy. However, in her role as CEO, she has found herself speaking in various forums – from employee meetings to television and media interviews – and says that communication is a crucial skill for any business leaders to have.

“If I can’t say it in a way that you understand it, it doesn’t matter if it’s right. If you’re trying to advocate for a position or explain a strategy to an employee…if I can’t get that out in a way that people can rally around, the job is really hard,” she said.

Look for an environment you will be successful in.

When asked about her experience as a female leader in corporate America, Good said that she knew early on that she could be successful at a merit-based firm, and looked for those kinds of companies, as opposed to one where (say) participating in the company softball league would be necessary for promotion.

“I believe that in a merit-based environment, men, women, and diverse candidates can all be successful. Positioning yourself in a place where your capabilities speak very loudly — I would encourage you to do that,” she concluded.