After graduating from the Vanderbilt MSF program in May, Andrew Walters was named CEO and Co-Founder of OrcoGuard this summer. 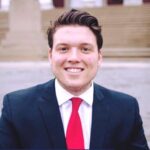 In his role as CEO, he oversees daily operations, works with the company’s go-to-market strategy, and fosters key partnerships.

“Food insecurity is a big issue that we’re tackling at OrcoGuard,” said Walters.

Walters first became aware of OrcoGuard as a student in Jon Lehman’s “Strategy and Operations Consulting” course, which gives students the opportunity to analyze real-life business plans and provide recommendations to the business stakeholders.

The original business plan for OrcoGuard was developed by Peter Rousos, Director of Economic and New Venture Development, and George Wilson, New Ventures Officer, at Vanderbilt’s Center for Technology Transfer & Commercialization (CTTC), along with Dr. Zwiebel, Dr. Ann Carr, a current visiting scholar and former post-doc fellow in the Zwiebel Lab, and other members of the CTTC.

Walters reviewed OrcoGuard’s business plan in Strategy and Operations Consulting and provided recommendations to Rousos, who left impressed by the analysis and Walters himself.

“Andrew [Walters] was especially engaged and had experience working with investors before,” said Rousos, “so he had a strong understanding of what it took to form a business.”

OrcoGuard is continuing to develop and grow under its current leadership and is actively looking to expand the already well-rounded team. Dr. Zwiebel and Dr. Carr currently serve as Co-Founder and Chief Scientific Officer and Chief Regulatory Officer, respectively.

Walters, who has also joined the CTTC as an Entrepreneur-in-Residence, is leaning on his MS Finance education in his new role.

Coming from a family of traditional farmers, Walters has a personal connection to the value of agriculture and agricultural developments. He viewed his opportunity with OrcoGuard as a chance to “work in the future of agriculture technology” and that it was something he “couldn’t pass up.”

“Having those roots in farming and seeing the agriculture space growing up, it’s awesome to impact that now in a new capacity,” said Walters.

For Rousos, OrcoGuard showcases the power of Vanderbilt’s interdisciplinary approach and the CTTC’s ability to bring great ideas to market.

“It encourages us to ask the question, ‘are there others that we can and should get involved with our work?'” Rousos says. “Universities like Vanderbilt have the power to unite within and can play a big role in advancing our own technologies.”