EMBA Path to the Promotion: VP of Lending, Pathway Lending

After graduating from Columbia University with a Bachelor’s degree in Economics, Jon Eisen spent almost 3 years playing minor league baseball before moving back to his hometown of Nashville and launching a career in sales. He joined HealthStream as an Associate Account Executive in 2015 before joining Shearwater Health a year later as a Director of Business Development. 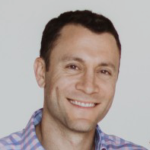 Eisen always knew he wanted to go to business school; after joining Shearwater, he decided to pursue an Executive MBA. “I knew I wanted to do something more,” said Eisen. “Sales is a vital role in an organization, but I wanted to challenge myself and learn something outside of sales. That was the point I realized getting an MBA would be my next move, because I had that background in sales, but I didn’t know much about finance, operations, human resources, accounting, and those important things you learn in business school.”

For Eisen, the decision to attend Vanderbilt was obvious to him, due to the Nashville location and reputation of the Vanderbilt network. He started the Vanderbilt Executive MBA program in August 2017. A few months into his first year, he met with Lacy Nelson, Senior Associate Director of Alumni and Executive Career Management. Eisen says his conversation with Nelson gave him the career clarity he needed and helped him craft his story.

He credits Launching the Venture with Michael Burcham and Corporate Value Management with Craig Lewis with giving him the tools he needed to work for a startup, which came in handy when he took a new position with axialHealthcare during his second year in the program.

‘I’m so grateful for those classes, because I learned different ways a company can struggle and what’s really important when it comes down to running a successful company. Those experiences have helped me tremendously in my new role,” says Eisen.

After graduating in May 2019, Eisen made a transition from Healthcare to Finance. He began working for another small startup company, Farmhold Financial, as the Regional Director of Business Development. His path to the promotion doesn’t end there: Eisen now serves as Vice President of Lending at Pathway Lending. “My job is to work with startups and existing small businesses on their business models and plans and ultimately determine to what capacity they are ready for a loan, based on their historical financials and projections,” he explained.

Looking back on his education and career, “I can see how Vanderbilt and the MBA helped me realize what I enjoyed the most and what I was the best at,” he said. “At Pathway Lending, the Vanderbilt Executive MBA prepared me tremendously for this role, which is so different from what I had been doing before. Now I wake up every day invigorated by the potential to help businesses in our community! And that’s an awesome feeling.”