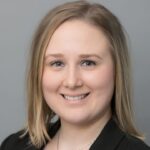 Kristen Boxberger graduated from Kalamazoo College in Michigan in 2011 with Bachelor’s degrees in Business and French. She thought business school could be in the cards for her after taking the GMAT and receiving information from Vanderbilt about its Master of Accountancy (MAcc) program. She attended an open house for the program, which piqued her interest and led her to apply.

“After going to the open house and meeting the head of the Macc program at the time, a few alumni, and some of the firms that recruit out of Vanderbilt, I was completely sold on the program,” said Boxberger.

Boxberger started the MAcc program in August 2011 and shortly after began the recruiting process with the accounting firms, which she described as “intense” but “seamless.” In November 2011, she was hired as an Assurance Intern with PWC in Detroit, where she worked on the Ford Motor Credit Company account.

After her internship concluded in February 2012, Boxberger was offered a full-time position with PWC as an Assurance Associate. During her time with the firm, Boxberger was promoted twice, which she says would not have been possible without the preparation Vanderbilt MAcc offered.

“The MAcc program really taught me how to learn,” said Boxberger. “The tax code changes every year, so there’s no way I’m going to remember anything from the tax code that’s relevant today, but the program taught me to be curious and to continue to learn and ask ‘why’ behind what I’m looking at. That’s something that’s really stuck with me throughout my career,” she added.

Boxberger also credits the Vanderbilt MAcc program for equipping her with tools she used to set herself apart during her time with PWC and when she eventually applied for a position outside of the firm in 2021.

“Even though it had been a decade since I had gone through an interview process, thanks to the MAcc program, I still felt very prepared to walk into an interview again,” she said. “I really think that’s due to the coaching I received with Kimberly Pace, where I learned how to do things like properly shake hands and present myself professionally.”

Boxberger joined General Motors in April 2021 as a Capital Management Controllership Senior Analyst. She has since been promoted to Supervisor of Global Product Development.

“I feel really proud of where I have gotten in my career thus far. From a French major who didn’t know what she wanted to be, to being in the room and sitting at the table with the movers and shakers (of GM) and being able to contribute my ideas and be taken seriously even just a decade into my career,” said Boxberger.

Click through the timeline below to see a visual of Kristen Boxberger’s Path to the Promotion.

Want to learn more about MAcc?