Paul Jacobson’s career trajectory has been a steep one. The Vanderbilt Business graduate (MBA’97) was named Chief Financial Officer of Delta Air Lines before the age of 40. At Delta, he quickly earned a reputation as the top CFO in the industry, helping to transform the company into one of Fortune’s Top 50 most admired companies and navigate existential levels of uncertainty in the early stages of the pandemic. In December 2020, he joined General Motors (GM), where he serves as EVP and CFO.

Jacobson considers himself blessed with his level of success – “a career of a lifetime before 50”, in his words – but he attributes some of it to his approach to work, one that’s rooted in values above all else.

“When we attach values to our work, there’s a greater good there that’s established for everyone, rather than just working for work’s sake, working for money, or working for titles,” he says. 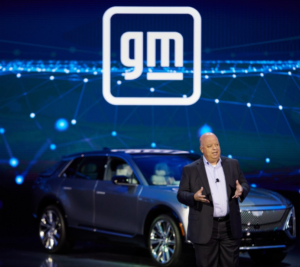 Attaching values to work is important when you work at a company undergoing a transformation as complete and ground-breaking as General Motors’. The largest U.S.-based automaker by volume plans to eliminate tailpipe emissions from light vehicles in the United States by 2035, with significant milestones just around the corner. GM has committed to introducing 30 new electric vehicles (EVs) globally by 2025, relying 100% on renewable energy to power its U.S. facilities by 2025 and global facilities by 2035, and roughly doubling its revenue by 2030. And it’s not just about selling EVs; the automaker is testing driverless rideshare services, developing insurance offerings, and exploring other software and services opportunities to drive growth.

The scale and speed of this transformation, on top of the associated costs, could produce anxiety in the most seasoned of financial executives, but Jacobson sees the opportunity and GM’s ability to execute in only favorable terms.

“We’re writing stories that our grandchildren will read about a pivot of a great American company and what it’s done for the next generation,” says Jacobson. “To be part of that is incredibly humbling.”

Jacobson has firsthand knowledge from his time at GM and Delta of how industries are evolving to match the developments in employment models and consumer trends. “Companies are finding that if you don’t have a value set, if you don’t stand for something, whether it’s social change or environmental change, you’re going to miss out on capital, and you’re going to miss out on talent,” he says.

The CFO credits generational change as the moving force behind the uptick in corporate involvement with environmental and social causes. “It’s being driven by investors’ priorities and in the employment model,” he says. “ It’s very clear that the employees that are completing school and entering the workforce are very values-oriented, and are focused on what they can do to help make a difference and they want their values reflected in the companies they go to work for.”

Jacobson, the featured speaker at Vanderbilt Business’ 2022 Commencement, urges the next generation of business leaders to be “very conscious of what their value sets are, and look for that in a match with the companies that they choose to work for.”

“I’m a big believer that if you love the work that you’re doing, nothing else really matters,” he says, “because you’re going to pour yourself into it, and you’re going to be successful in it.”