Vanderbilt’s Master of Accountancy (MAcc) program partners with a group of liberal arts institutions, such as Centre College, to give undergraduates interested in business the tools needed to launch a career in public accounting with only 12 additional months of schooling. 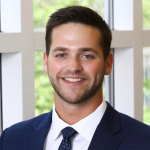 Madison Marcum (MAcc‘22, Centre‘21) and Eric Niemann (MAcc‘21, Centre‘20) discuss their paths to Vanderbilt, their time in the program, their current careers, and reasons why Centre undergraduates should consider the Vanderbilt MAcc.

Centre College fast facts: Centre College is a small, private institution located in Danville, Kentucky. It is ranked No. 59 among liberal arts colleges in the country according to U.S. News.

Discovering Vanderbilt MAcc: Marcum’s time in Vanderbilt’s Master of Accountancy program had been well anticipated. She first heard about the program and developed an interest in business during her senior year of high school. Four years later, she said her interest grew after Emily O’Dell, Director of MAcc Programs, visited Centre and offered more insight.

An information session and conversation with O’Dell also motivated Niemann to apply to Vanderbilt. He had been seeking a MAcc program that didn’t put him at a disadvantage due to his lack of an undergraduate Accounting major.

“It was just catered to people in my position,” Niemann said.

The Centre + Vanderbilt experience: For Marcum, her time at Centre set her up for success in the Vanderbilt MAcc program. Despite the program’s rigor, she said the parallel philosophies and missions of Vanderbilt and Centre facilitated her academic and professional success.

“Both Centre and Vanderbilt expect 110% out of their students, encouraging everyone to pursue their goals, no matter how far-fetched they may seem,” Marcum said.

Niemann noted that Centre provided a foundation for the soft skills he later learned in-depth at Vanderbilt. He said the academic shift from Centre to Vanderbilt was generally challenging, in part due to his broad Economics and Finance degree. However, the resources at Vanderbilt, including the University Counseling Center, helped him succeed. 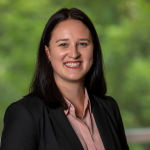 Similarly, Marcum said Vanderbilt guided her in narrowing her career after earning undergraduate degrees in Economics and Finance and Psychology. Through opportunities at the Big Four and connections with Vanderbilt’s vast alumni network, she eventually settled on public accounting and auditing as a career path.

“Having access to the huge alumni network has given me countless opportunities to speak and learn from professionals who were once sitting in the same seat at Vanderbilt,” Marcum said.

Where they are now: Neimann and Marcum both interned with EY in Audit during their time at Vanderbilt, and both earned full-time offers from the Big Four accounting firm. Niemann currently works out of EY’s Louisville office, while Marcum will begin her career out of Chicago.

“This career path could not be possible without my MAcc degree,” Niemann said.

Niemann explained that techniques learned in the Vanderbilt MAcc program allowed him to advocate for experience in the healthcare industry when transferring to the EY Louisville office.

“What separates Vanderbilt’s MAcc program from a lot of others is the soft skills, professional skills; being able to look somebody in the eye and make sure that they know you care,” Niemann said.

Advice for Centre students: After benefitting from Vanderbilt’s alumni connections, Marcum is ready to pay it forward to future Vanderbilt MAcc students, particularly those from Centre. She encouraged students from her alma mater to take on the challenge of the MAcc program.

“Ultimately, it will be one of, if not the best decision, you can make for your future,” Marcum said. “Professors and MAcc alum, including me, will do everything in their power to help you take advantage of this tremendous opportunity.”

Likewise, Niemann encouraged Centre College students to use their post-undergraduate time wisely and to choose graduate programs that are centered around their goals.

Want to learn more about MAcc?