Blockchain-based mobile application earns $25,000 prize, the latest in a string of victories for the startup

The first Sohr Grant winner of the 2017-2018 academic year has been selected. Leaf, a blockchain-based mobile app that allows refugees to safely transport their money digitally from country to country, has earned the $25,000 prize. 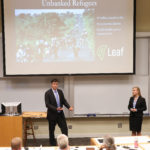 Tori Samples (MBA’18) and Nat Robinson (MBA’07, Law’18) have been developing the product since last year, when they competed in the $1 million Hult Competition. Leaf earned $15,000 at the 36/86 Student Edition Pitch Competition this spring. Other members of their team from Owen and elsewhere on campus earned Summer Fellowships through the Turner Family Center for Social Ventures to evaluate global market opportunities and develop a prototype.

“We’re extremely honored to win the Sohr grant,” Samples said. She noted that Leaf will use the grant to help with further development of its blockchain platform and a pilot in Rwanda, planned for March. “We couldn’t be more excited!”

The judges panel consisted of Jim Sohr (MBA’83), Professor Germain Boer, and three Nashville-based venture capitalists – Jared Winegrad from FinTop Capital, Andrew Bouldin from FCA Ventures, and Andrew Goldner from GrowthX. Finalists were given 10 minutes to present and 20 minutes to answer questions from the panelists.

We’re starting to see the benefit of everything we have on campus. We’re putting entrepreneurship at the forefront. – Michael Bryant

Michael Bryant, Director of the Owen Center for Entrepreneurship, cited several elements that led the panel to award Leaf the prize. 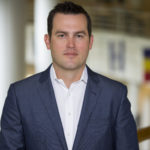 “(Leaf) has potentially the largest market,” he explained, “and they’ll attract buzz and impact investing, which gives them a higher likelihood of success. The team itself was also notable; people with different skill sets wanted to work with them.”

The other finalists – housing concepts Avail and Let’s Room Together – will have an opportunity to incorporate feedback from Bryant and the judges and pitch for $25,000 prize again in March and April, when the spring session for the Sohr Grant kicks off.

“The only way for the door to close on the Sohr Grant is to win one,” said Bryant.

Seven startup concepts competed for the grant during the fall session, marking the highest participation level to date. “We’re starting to see the benefit of everything we have on campus,” Bryant concluded, “from the Wond’ry to the Center for Entrepreneurship and Turner Family Center. We’re putting entrepreneurship at the forefront.”