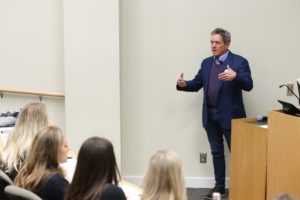 Coulter Winn helps design spaces where dreams come true. He began his career as a concept architect for attractions and venues in Disney parks around the world; his impressive list of projects include The Twilight Zone™ Tower of Terror at Disney’s Hollywood Studios and Buena Vista Street in Disney California Adventure Park. Winn’s accomplishments at Disney’s parks led him to become the Design Studio executive at Walt Disney Imagineering, the design and development arm of The Walt Disney Company.

Winn came to speak at Vanderbilt Business this month as part of the Distinguished Speaker Series (DSS). DSS is a student-run initiative that regularly invites prominent leaders in the business world to share lessons they learned during their careers. Past speakers include Daniel Fete, CFO of AT&T Communications, LLC, and Sarah Trahern, CEO of the Country Music Association. These talks are open to all Vanderbilt students, faculty, and staff.

While walking the audience through the design process at Walt Disney Imagineering, Winn discussed traits that all good leaders should have. Here are Winn’s five keys to successful leadership for aspiring business leaders:

1. Don’t be afraid to make the first mark.

When starting a project, employees brainstorm and ideate multiple solutions. However, the very beginning can be a little intimidating for some. As creative people have done for ages, Winn described starting a new project as looking at a blank sheet of paper. He encouraged the audience to treat the sheet of paper as an opportunity and not be afraid to “make the first mark.”

“Some people are terrified of making that first mark, because it could be the wrong mark. But (for) another student, it’s a great opportunity — you can do anything you want, you can create whole new ideas, a whole new world. So it’s that first thing that you put down and how you can overcome any hesitations you might have (about a project),” he said.

Winn and his fellow Imagineers call the brainstorming and ideation phase “blue sky.” “(In the) blue sky process, you’re just spit-balling ideas, you’re putting stuff on the walls,” he said. The blue sky phase proved crucial to designing an attraction called Soarin’ Over California. Winn started with sketches for two different buildings, but the ride engineer came up with a way to consolidate the two buildings into one during the blue sky process.

Winn emphasized how important it is to encourage employees during the process. If employees are unafraid of being criticized, they contribute more to the brainstorming. This can lead to great ideas, such as the consolidation of the two buildings. “If you ever get in a position where you’re trying to drive creative individuals, you have to create a safe space. There are no bad ideas,” Winn said.

There are a variety of interests in a team, so there has to be a collective vision for the group to succeed. Winn conducted a survey for his employees in the design studio to encourage open communication and to understand what kind of things they viewed as problems in the work environment. The survey helped Winn realize that his employees wanted more opportunities to become well-rounded.

“Everybody has to think about having a voice in the process. So I had my leadership team put together a design studio survey. You’ve got to look under the hood… you’ve got to figure out what’s wrong. You (have) to get everybody to speak openly and candidly about the problems,” Winn said.

Leaders are human. They can’t see everything that’s going on, and they make mistakes — which is why receiving feedback is so important. Winn acknowledged that these evaluations may not always be positive. However, learning from and incorporating feedback helps a leader grow. He also recommended reassuring employees so that they aren’t afraid of reprisals when giving assessment to leadership, because honest feedback is beneficial. “It’s gonna be tough as a leader. That’s part of what you’ve been going through as a leader — to be open to having a feedback process,” he said. “It’s an ongoing process.”

5. Give recognition to the right people.

A good leader recognizes their employees’ hard work. Winn told the audience that at some point in their careers, they may work under a leader who doesn’t give recognition. He advised them not to repeat that behavior and always remember to give credit where it’s due. “Recognition is huge. I’ve been talking to the leadership of the division, and I said, ‘Here are the people you want to mention in this conversation. Make sure that you get that these are the ones that are doing the work. Give them the credit, not me, not my leaders,’” he said. “So acknowledge it. Never take credit for anybody else’s work.”