John Hawkins, MBA’92, is familiar with the juggling act. During his time at Vanderbilt, he was balancing the life of a newly married husband with the demands of business school. So it’s particularly fitting that the scholarship Renee and John Hawkins established now supports Alrutz, and by extension, his family. As a second-year MBA student and father of a baby girl, Zach Alrutz has had a lot on his plate this past year— interviewing for jobs, wrapping up classes, changing diapers at 2 a.m. Sleep is often not on his to-do list.

John Hawkins, MBA’92, is familiar with the juggling act. During his time at Vanderbilt, he was balancing the life of a newly married husband with the demands of business school. So it’s particularly fitting that the scholarship Renee and John Hawkins established now supports Alrutz, and by extension, his family.

Part of why students such as Alrutz and Hawkins have always flourished at Owen is the close-knit community the school fosters. That environment helped draw another Hawkins scholarship recipient Fred Gehrig, MBA’18, to Vanderbilt. “One of the things Owen talks about in the recruiting process is the school’s family-oriented environment. That’s not just a marketing push. Everyone cares about you and will take time out of their busy schedules to support you in any way they can,” he says. “That’s so unique in such a typically cutthroat environment such as business.”

From generation to generation The Hawkinses established their scholarship in 2010 for exactly these reasons. “We have a real sense of pride about what Owen does,” Renee Hawkins said. “The school served my husband well, and we made some lifelong friends there, including one of my husband’s current business partners.” But Renee’s’ own experience also motivated the couple’s decision to establish a scholarship. “I was the first person in my family to attend college, so I understand the need for scholarships,” she says. “To afford college I lived at home in Murfreesboro, Tennessee and also worked part time. While I was very happy for the opportunity to go to college, financial considerations did limit what school I could attend. “Ultimately, you hate students’ opportunities to be limited by their financial capability and hate for the school’s opportunity to attract quality students to  be limited by what that student can pay. The Hawkinses also have a different perspective about the value of Owen because of their son’s time as an undergraduate at Vanderbilt.

“It’s very tough for college applicants these days,” says John Hawkins. “They are taking all these tests which tell them what they should do in life before they get a chance to figure it out on their own. Our son was a really good math student, and so he was told he should consider majoring in engineering, which he did.”

But by the end of his sophomore year, John Hawkins Jr. knew he needed to pursue a different field. Owen and its 28-day Accelerator summer program provided answers. During the program, he worked on a team of students acting as consultants to solve problems for companies, ultimately presenting their ideas to the company’s management. That work led to a consulting internship opportunity, which became a full-time job after graduation. 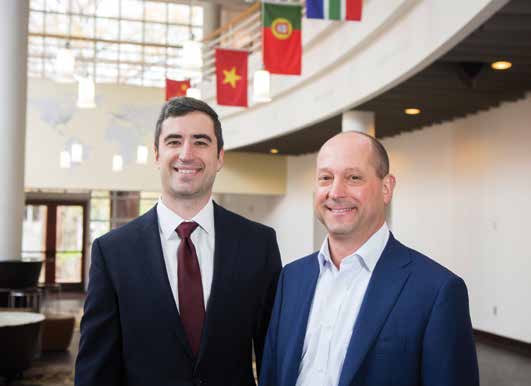 The gift of an open door
That experience echoes John Hawkins’ own time at Vanderbilt, or as he puts it: “Owen definitely opened up possibilities for me.” The same is true for Alrutz, who recently received six job offers ranging from asset management to brand strategy. He ultimately decided to take on a brand management role for Johnson & Johnson after graduation. He landed that job after a summer internship, during which he developed
a valuation model for the company’s pipeline projects.

“It’s really tough to make that transition from a great idea to an actual product. My project took those ideas and assigned financials and market size to them. I would not have been able to do it if it were not for classes at Owen. I also reached out to some of my professors for advice. That type of relationship—being that close to your professors— is incredibly valuable and speaks volumes about Owen’s culture of camaraderie,” Alrutz says.

Gehrig, who flexed his entrepreneurial muscles early with paper delivery and lawn care businesses in high school, says he felt Owen’s community support when he was prepping for consulting internship interviews. “There wasn’t a single person that I spoke with that wasn’t willing to take some time to help me out, whether that was giving me some interviewing tips, introducing me to someone in the industry or walking through practice case interviews,” he says.
As a way of thanking the community that supported him, Gehrig hopes to help grow Owen’s consulting network. “I want to be a resource for future students,” he says. “Having a strong network is so important, and I think it would be unfair and unfitting of the community we have not to help with that.”

The scholarship has made a huge difference in my life and will continue to do so for a long time. — Zach Alrutz, MBA’17

Gehrig also sees giving back to the Owen School as a way to thank the Hawkinses. “It means a lot that someone I’ve never met has invested in my future,” he said. “It’s given me a lot of confidence that I’m going in the right direction. I want to do the same for future students.” What began a quarter-century ago with the newly married Hawkins’ journey at Vanderbilt is now creating new opportunities that will last for years to come.

Scholarship support is a key priority for the Owen Graduate School of Management. Today, only a third of the school’s scholarships are funded through endowment. For more information on creating scholarships, contact Erik Kahill at erik.d.kahill@vanderbilt.edu or 615/343-4072.