4 Healthcare Leadership Lessons from the Former CEO of LifePoint Health

When HCA spun off LifePoint Health as a separate company in 1999, Bill Carpenter had already built a successful career as a practicing lawyer, specializing in corporate clients. He decided the time was right to make the leap to the corporate side, and become LifePoint’s first general counsel. He served in that role until 2006, when he was appointed CEO; he was also appointed Chairman of the Board in 2010. Carpenter led LifePoint until last fall, when his retirement was announced ahead of a merger with RCCH HealthCare Partners. (The merger has since been finalized.) 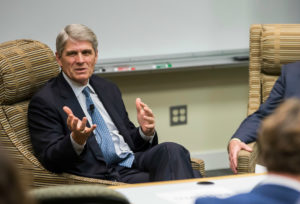 Carpenter came to speak at Vanderbilt earlier this month as part of the Distinguished Speakers Series (DSS), a student-run initiative that regularly brings in high-profile speakers to share their business insights at Vanderbilt. Past speakers include James Forbes, Managing Director and Vice Chairman of UBS Group, Americas; Anu Aiyengar (MBA’99), Head of M&A North America at J.P Morgan; and Reese Witherspoon, Oscar award-winning actress and founder of Draper James. Hosted by Dean Eric Johnson, the talks are open to all students, faculty, and staff at Vanderbilt.

During his talk, Carpenter reflected on his successful career before offering advice for students looking for roles in healthcare and beyond. Here are his top four tips for aspiring business leaders:

Check in on your strategy regularly.

LifePoint debuted as a public company in 1999, and every year Carpenter would sit down with company leaders to assess their strategy and make sure that staying public was still the right call. For a long time, the answer was “yes”— until a few years ago, when they concluded the markets were undervaluing the company and decided to explore private options. “I think it’s important to look at the strategy honestly, and make a determination about whether or not you’re on track,” Carpenter said.

Keep your company leaders in the loop.

As the CEO and chief decision maker at LifePoint, Carpenter made an effort to keep his board and other company leaders informed about what he was thinking and where he wanted to take the business. “Never get ahead of whoever your boss is,” he advised listeners. “Even if you’re the chairman or the CEO of the company, you have a boss…I made sure that I never got ahead of my board.”

Look for a partner who complements your strengths.

As LifePoint began exploring their options of taking the company private and merging with another business, Carpenter made sure to look for partners who would complement LifePoint’s focus on hospitals in rural markets. “You need to be best in the world…at whatever you do, but you can’t be best in the world at everything,” he explained. For healthcare companies specifically, he says, “You need to find a partner who will help you achieve the best outcome for your patients…Remember, at the end of the day, the patient is really the reason we do this.”

Be upfront about mistakes.

Carpenter’s last piece of advice for listeners, especially students, was simple: “Do the right thing.” He urged them to raise their hands and speak up when they made mistakes, or if they see behavior that seems shady or unethical at their future employers. “If you sweep it under the rug…somebody’s going to find about it…and then it becomes a problem,” he said. “When you mess up, fess up.”